Well, I'm back, but goodness knows for how long. There will be knitting content and yarny goodness ensuing, but probably in short bursts instead of long posts.

If anyone's out there, how do you like the new layout?
Posted by Unknown at 12:46 PM 7 comments:

in my cart and didn't buy it. My will is iron dammit.

I should be sleeping right now, and if the Husboy asks I was in bed hours ago. The reason I am not in bed yet is because I had an itch to start something for myself, which turned out to be Hey Teach in Valley Yarns Colrain that I picked up two Stitches ago. The reason that I am blogging instead of casting on is because I was looking for the recommended size 8 needle amongst my circulars, grousing and fretting because I have strictly forbidden myself from buying any needles, and found a 16" (not quite enough for the back) and this: 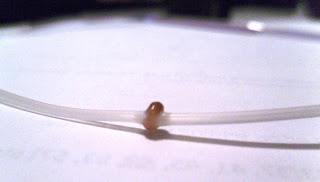 A relic of my early knitting days when all I wanted to do was knit hats and either couldn't afford or couldn't fathom dpns (most likely a combination of both). What I would do is cut out the middle of the cord and melt the two ends together. I can't even think of how I did the crown at this point.

What a different time it was. I had no contact with the fantastic online knitting community, access to an incredible assortment of terrible knitting books from the 1970's at my public library, and no idea that there was better yarn than the crap I was picking up from the clearance section at JoAnn's. I couldn't even purl at this point, darn it. That little charred nubbin in the middle of that cord symbolizes the frightful place I was in at that point in my life, struggling through and making my own solutions to a lack of resources that did not stop at my knitting. Next to that, my little island looks pretty sweet.

Now here I am, with fabulous yarns languishing in various cubbyholes around the house, a world of patterns at my fingertips, and still no decent size 8 circulars to speak of. I'm going to suck it up, grab my very nice size 7 needle, and enjoy my desert island knitting.

Hopefully everyone knows that I have a lovely little Etsy shop: Knitting Wounded Yarns, that sells re/upcycled yarns rescued from sweaters that have seen better days. Everyone also probably knows that no one wants to buy a bunch of recycled cotton when you can get a ball of new for a buck. Next time, could someone tell me please?

So, long story short, I have a huge Ikea bag full of cotton that I can't sell and can't bear to throw away after investing so much time in taking it apart. What to do? 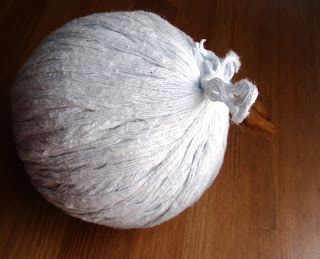 These are not just any poorly hand-wound balls of yarn. Layered inside are little treasures that follow a theme, like Kitty Lover or Foodie. They were a lot of fun to put together, but then what? 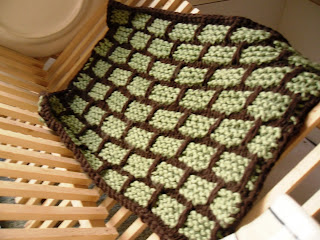 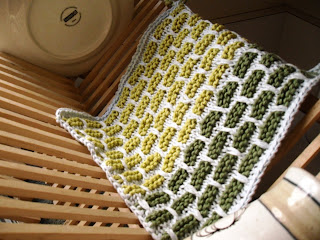 I traded some sock yarn for the first Mason Dixon book, and was inspired to knit up a few of these stupid-easy cloths.

Okay, now what? How about I design a few of my own dishcloths? Say "hello" to Knitting Wounded Designs on Ravelry. 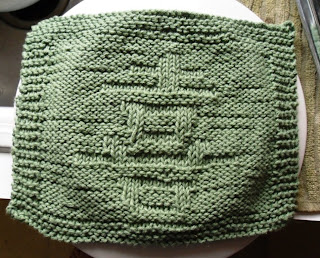 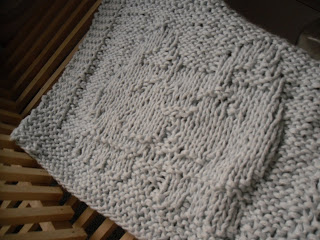 Chibi Kitty: $1.00
I cannot tell you how much I am loving Intwined Studio right now. It makes it so easy to translate your ideas into a workable pattern, and if I sell 40 more patterns (at $1 a pop) it will have paid for itself, a very reasonable investment.

Of course, I have some free patterns in the shop as well. I want to rewrite the Spaced Chocolate Beanie and Dizzabelle Scarf in Intwined, but the first versions are in there. I cannot seem to bring myself to ask for money when basing a pattern on someone else's concept, so here's the newest freebie, special for my fellow Firefly/Serenity fans: 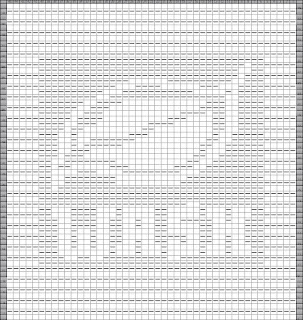 Leaf on the Wind Wash Cloth: Free
Next on the design roster, bullet hole socks.
Posted by Unknown at 10:56 AM 2 comments:

How To Ruin A Diet: Now With Links!

This fiber/book/needle/everything diet is actually going pretty well. I traded some sock yarn I was probably never going to get to for some new books on Ravelry, sold some books on Amazon and gave away a few on Freecycle, so we're going in the right direction.

So, here is a short list of folks trying to sabotage my good intentions:

The Dizzy Sheep: This neat shop sells one yarn/fiber a day at a pretty nice discount. During Memorial Day weekend they did a spin-off, where as soon as one thing sells out another takes its place. I thought I was going to faint from the strain.

Three is probably enough for the day. Now, go forth and buy this stuff so I can't. Thank you.
Posted by Unknown at 9:45 AM 3 comments:

Hey there folks. Been too busy and too tired to be coherent in any facet of my life, so here's some homework from last semester for you: 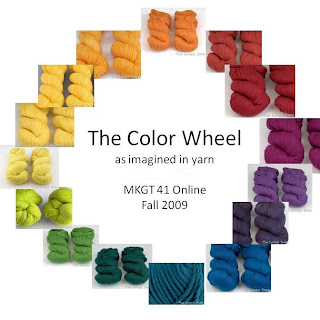 Blame It On The Yenta

Okay, so I'm sitting on the couch, whining about how much my boobs hurt and pretty much minding my own business when the Yarn Yenta busts up my craft diet. Now, before we all start calling her filthy names and throwing shoes in her general direction, let me explain. The Yarn Yenta, also known as the fabulously talented Heatherly, is one of my favorite people in the world. Not only is she wicked talented and smart and funny, she is also one of the very few absolutely genuine people it has been my pleasure to meet. 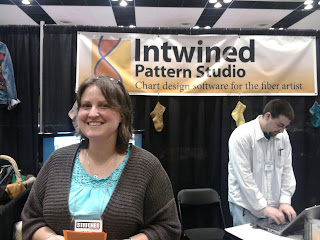 She's even photogenic! Heatherly at Stitches West 2010.
Anyone who has been around me for very long usually figures out that I'm not really religious, meaning that I've tried a few out and have decided that the Universe is entirely too smart for me to figure out, so I'm going to wing it. This puts me in the awkward position of having to explain myself to anyone who is religious, then having to explain to them that I like myself that way and yes, I know I'm going to burn in the Lake of Fire for all eternity, but thanks anyway.

Heatherly is what I consider a true believer. She is deeply committed to her beliefs, so much so that she actually lives by their teachings instead of pushing those beliefs in your face to prove something. This not only makes it enjoyable to be around her, it makes her a completely and utterly delightful person. In other words, she is so perfect that she can pull it off without making you hate her for being perfect. Heatherly is who I would want to be if I wasn't completely happy with being myself.

Okay, back to my falling down. I swear, I wasn't even on Ravelry. I was on Facebook for cripes sake, letting it suck some time when Heatherly does an update congratulating someone else for winning the Sock Madness 4 competition and includes a picture of her own submission.

It is called Cool Beans people. I say, "Cool Beans", all the time. Really, ALL THE TIME. I have people who work with me all over the country saying it now. And it is really gorgeous colorwork and I had popped onto Ravelry and bought it before I could even think about it. I can't kick myself too hard for it; I have the perfect yarn already wound up and ready to go.

Do me a favor, go onto the Yarn Yenta website or her Ravelry page and buy it too so I don't feel so silly?
Posted by Unknown at 1:00 AM 5 comments: